Tennis legend Billie Jean King was born in 1943 in Longbeach, California. Today, she is retired, but during her career, she won 12 Grand Slam Singles titles, 14 Grand Slam Women’s Doubles titles, and 11 Grand Slam Mixed Doubles titles. She’s generally considered to be one of the best female tennis players and athletes in history. Perhaps the tennis match she is best remembered for was the Battle of the Sexes in 1973 where Billie Jean King defeated Bobby Riggs. Riggs had been a top player, won the Wimbledon men’s singles title in 1939, and was considered the World No. 1 male tennis player for 1941, 1946 and 1947. Riggs claimed that the women’s game was so inferior to men’s that even at 55 years old he could beat the current top female players. He challenged and defeated Margaret Court. King had previously rejected challenges from Riggs, but then accepted an offer for a prize, winner takes all.

The match known as the Battle of the Sexes garnered huge publicity. In front of 30,492 spectators and a television audience of approximately 50 million people in the U.S. and broadcast to 90 million in 37 countries, King beat Riggs. The match is considered a significant event in developing greater recognition and respect for women’s tennis. King said, “I thought it would set us back 50 years if I didn’t win that match. It would ruin the women’s tour and affect all women’s self-esteem,” and that “To beat a 55-year-old guy was no thrill for me. The thrill was exposing a lot of new people to tennis.” 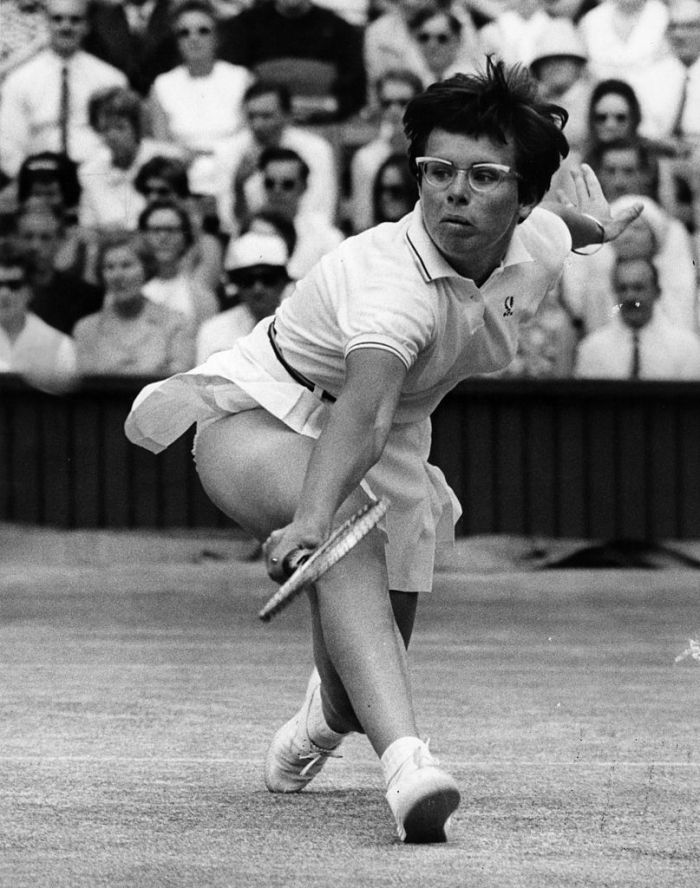 Over the course of her incredible career, King won a total of 39 Grand Slam titles; 12 in singles, 16 in women’s doubles, and 11 in mixed doubles. She is also the founder of the Women’s Tennis Association and the Women’s Sports Foundation. King was inducted into the International Tennis Hall of Fame in 1987. The Fed Cup Award of Excellence was bestowed on her in 2010. In 1972, she was the joint winner, with John Wooden, of the Sports Illustrated Sportsman of the Year award and was one of the Time Persons of the Year in 1975. She has also received the Presidential Medal of Freedom and the Sunday Times Sportswoman of the Year lifetime achievement award. She was inducted into the National Women’s Hall of Fame in 1990, and in 2006, the USTA National Tennis Center in New York City has renamed the USTA Billie Jean King National Tennis Center. In 2018, she won the BBC Sports Personality of the Year Lifetime Achievement Award.