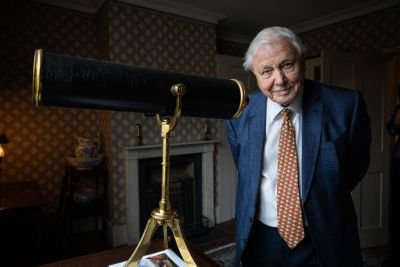 Sir David Attenborough’s debut on Instagram last week landed him the Guinness World Record for the fastest time to reach 1 million followers. It only took him 4 hours and 44 minutes to topple the record, previously held by Jennifer Aniston. Since then, his followers have more than quadrupled. Aniston set the Instagram record in October 2019, accruing a million followers 5 hours and 16 minutes after her debut. Other big names who have held the title in the past include David Beckham, Pope Francis, and the Duke and Duchess of Sussex. But none of these other figures have held the world’s attention for as long as Attenborough has in his nearly seven-decade career.

“I’m making this move and exploring this new way of communication to me because, as we all know, the world is in trouble,” 94-year-old Attenborough said in his first-ever Instagram video. “Continents are on fire. Glaciers are melting. Coral reefs are dying. Fish are disappearing from our oceans. The list goes on.”

Attenborough plans to use the platform to address environmental crises and share potential solutions. Reaching a younger audience, he told the BBC yesterday, gives him “great hope.” “I feel privileged that they should listen to what an old bloke like me is talking about,” Attenborough told the BBC. The prolific broadcaster and naturalist also has a documentary called A Life on Our Planet that debuts on Netflix on October 4th. In the documentary, Attenborough recalls the natural wonders he’s documented over his career, the destruction he’s witnessed at the hands of humans, and what can be done to repair the damage. “Human beings have overrun the world. This film is my witness statement and my vision for the future,” he says in the documentary trailer.