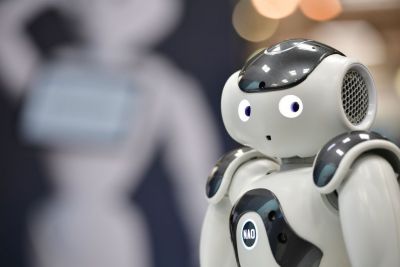 A Florida seafood restaurant has turned to technology to help fill its employment gap. Three robots have “joined the staff” at Mr. Q Crab House in Hollywood, Florida — in part because of staff shortages amid the ongoing COVID-19 pandemic, owner Joy Wang told the South Florida Sun Sentinel. The automated servers, costing $10,000 apiece, were brought on board at the Cajun eatery to help with hordes of customers that flow in over the weekends from Seminole Hard Rock Hotel and Casino, which is right across the street.

One of the robots, Peanut, greets guests as they enter and shows them to their table. A human server then takes their order, while another robot bring customers’ food to their table. Aside from their serving capabilities, the robots (which are popular with guests) can also entertain, singing “Merry Christmas” and “Happy Birthday” in four languages.

Since the robots arrived at the restaurant about a week and a half ago, Mr. Q Crab House’s general manager Shaheen Maleki admitted to the Sun Sentinel that they can get “a little annoying sometimes.”

“Once Peanut started freaking out when its battery was low. It was saying to us, ‘I have to go back! I have to return myself!’ and we couldn’t find the volume button,” Maleki said.But their popularity on social media has helped spread the word, and Maleki says there are some perks to the technology. “For the bigger tables they’re perfect, because one robot can carry an entire table’s worth of food from the kitchen, but humans would have to go back three, four times.”