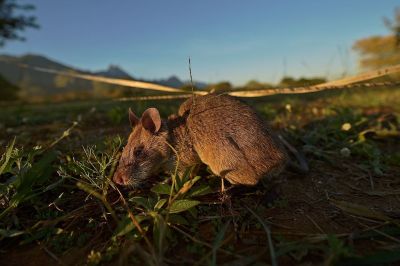 PDSA (formerly known as People’s Dispensary for Sick Animals) awarded an African giant pouched rat named Magawa with its Gold Medal award, making Magawa the first rat to score the U.K. charity’s honor reserved for heroic animals. Magawa is the 30th recipient of the prize. Magawa was trained to sniff out unexploded landmines, his size making him able to safely step over the explosives without setting them off.  According to PDSA, he has discovered a total of ″39 landmines and 28 items of unexploded ordnance to date” — making him the most productive critter involved in the HeroRAT program.

During the 5-year-old rat’s career, he has helped clear over 141,000 square meters of land (the equivalent of twenty football pitches), making it safe for local people. PDSA pointed out on Instagram that Magawa can cover an area the size of a tennis court in 30 minutes. If a human were to tackle the same space with a metal detector, they’d be busy for up to four days, they said. Magawa works in Cambodia, where PDSA said it’s estimated that 3 million landmines remain unfound. Some 80 million remain around the world.

“When Magawa detects a landmine by the chemicals used in it, he signals to his handler. They know that where Magawa signals is the exact location because his sense of smell is so good, and so can dispose of the mine safely,” the organization said of the trained animal’s process. “On a daily basis, HeroRAT Magawa’s work is life-saving and life-changing and has a direct impact on the men, women, and children in the communities in which he works,” added PDSA. “For every landmine or unexploded remnant he finds, he eradicates the risk of death or serious injury in locations already suffering significant hardship.”

According to the Associated Press, Magawa’s favorite foods are bananas and peanuts. He loves his running wheel, and PDSA described his personality as being “a determined worker and always friendly.” His trainers also said he’s “quick and decisive″”— but also “likes to take naps at break time.” The outlet also noted that Magawa’s tiny PDSA Gold Medal was created by Cleave and Company, the same jewelers who crafted Meghan Markle’s engagement ring.