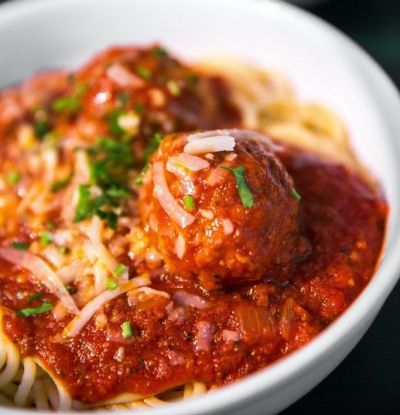 Let’s be honest, most of us go to Ikea not only to shop for home accessories and furniture but also to eat the food!  A trip to Ikea without its famous meatballs and mashed potatoes covered in a creamy sauce is just sad. Due to the closure of Ikea stores nationwide, we haven’t had our fill, but luckily,  they released their recipe for both the meatballs and the sauce! The six-step recipe looks both easy and delicious. If you’ve never tried this iconic meal before, we encourage you to get cooking!  “The dish is an unexpected meeting of flavors as the lingonberry sweetness contrasts, yet harmonizes, with the meatballs, while the cream sauce serves as a neutral ‘mediator’ between the two,” is how Ikea passionately explains it.

“Missing your IKEA meatball fix? We’ve created a recipe for you to re-create this delicious dish in the comfort of your own home,” the company wrote along with the diagram. Although this recipe isn’t the exact version of the one used in Ikea stores around the world, it’s still the perfect alternative for those missing the food from the furniture store. “Our ‘real’ meatballs and Swedish cream sauce recipe remains a closely guarded secret, known only to a select few. However, in good conscience we couldn’t deprive the nation from missing out on their meatball fix, so we’ve made an almost-as-delicious alternative that can be easily made at home! We hope that it fills a gap until we can meet again. Until then, stay home and stay safe,” Lorena Lourido, country food manager at Ikea U.K. and Ireland, said in a statement to TODAY Food.

Missing your IKEA meatball fix? We’ve created a recipe for you to recreate this delicious dish in the comfort of your own home #IKEAmeatballs pic.twitter.com/d89lRsJxH7

Ikea meatballs have been around since 1985 and were developed with the help of the store’s founder, Ingvar Kamprad, who was “highly involved in creating the taste and the texture of this classic dish,” an Ikea spokesperson told TODAY Food. “The IKEA meatballs, served in over 430 Ikea stores globally, are a true Ikea icon, just as known as the BILLY bookshelf or the KLIPPAN sofa and every year more than one billion meatballs are served at IKEA,” the spokesperson said. The meatballs are usually served hot in the store’s café or available to purchase frozen in the Swedish Food Market.