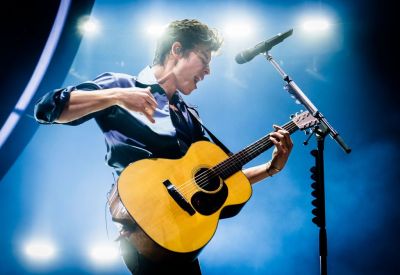 Shawn Mendes and Justin Bieber just released a brand new song! Titled “Monster,” the newly released track marks the first time the two musicians have worked together. Both have previously hinted that they would be open to working together. Released at midnight on Friday, the new single (which comes as part of Mendes’ soon-to-be-released album Wonder) begins with Mendes singing about being pedestal, “You put me on a pedestal and tell me I’m the best / Raise me up to the sky until I’m out of breath / Fill me yup with confidence, I say what’s in my chest / Spill my words and tear me down until there’s nothing left / Rearrange the pieces just to fit me with the rest, yeah.”

Then, Bieber chimes in on the song, adding, “I was fifteen when the world put me on a pedestal / I had big dreams shows and making memories / Made some bad moves trying to act cool, upset by their jealously / Lifting me up (Lifting me up), lifting me up (Yeah).” On Monday, both stars shared the same instrumental, teaser clip on their respective Instagram pages. “#MONSTER Nov 20th @shawnmendes,” Bieber captioned his post. Mendes echoed him on his own account, adding that the tune is the “next single from #WONDER.” During an interview with Zane Lowe on Apple Music earlier this week, Mendes spoke about his relationship with Bieber and how the track is about the troubles of fame.

“This song has always resonated with me and it just never found its way out. And now all of a sudden I was listening to it one day, and I just started my relationship with Justin,” he told Lowe about “Monster.” “It just started forming properly in the last three months. And I called him and I was like, ‘Look, I have this song. It’s kind of going there. It’s about how society can put celebrities up on a pedestal and watch them fall and it seems to be this entertainment thing. And it’s hard. And his heart fell deep into it,” he added. “And him and I, even yesterday, were on the phone for an hour and had the deepest conversation, I think, about so much. And it just felt really nice because it was a full-circle moment for me, this guy who was the reason I started singing.”

Mendes explained that Bieber was “Elvis to me” when he had just started singing, so the collaboration meant so much to him. “And to come back around and to have this very human to human conversation with him and his truth to come into that song and my truth to be there, it feels like one of the most special songs I’ve ever written,” he said. “And the more I listened to it and the deeper I get into it, this is not just about celebrities. This is the human experience.”