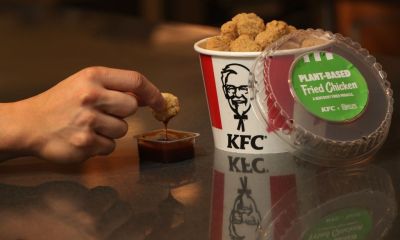 Fast food international giant KFC has partnered with Green Monday to release two plant-based menu items in 19 select locations in Hong Kong. The new products by KFC are part of their “New Era” series and include Alpha Foods’ plant-based nuggets and a burger made with Gardein. The New Era Nuggets are made with soy, wheat, pea protein, organic grains, and vegetables. The patties are served with Italian focaccia, sliced cheese, salad dressing, BBQ sauce, lettuce, tomatoes, and tortilla chips. According to KFC Hong Kong, the burger rivals the traditional meat offering in texture and flavor. Keep in mind that while the burger patty and nuggets are plant-based, they’re still fried in the same oil as other KFC products. This news follows KFC China’s move to add Beyond Meat burgers and Cargill-made plant-based friend chicken nuggets to its menu. According to Yum China (which owns KFC, Pizza Hut, and Taco Bell in China) KFC China’s trial of plant-based chicken nuggets was so successful that supplies ran out within an hour! 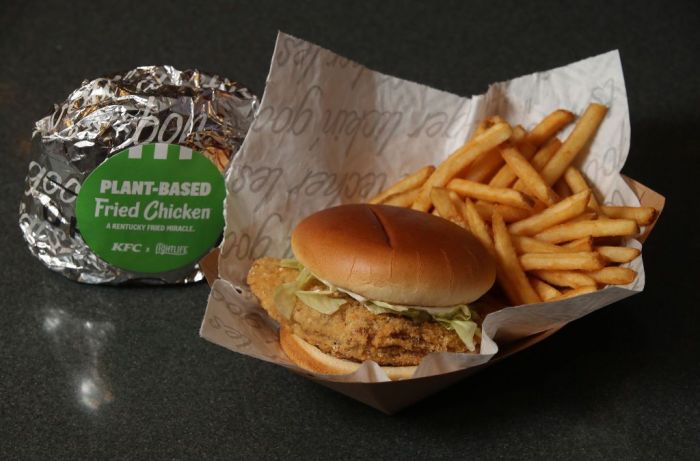 A market study by Euromonitor showed that China’s plant-based meat market grew to $9.7 billion in 2018 and is pegged to hit $11.9 billion by 2023. Speaking at the launch of the new products David Yeung, the founder and CEO of Green Monday said: “This milestone launch will without a doubt further ignite the plant-based movement in Asia and globally.” Pizza Hut is also partnering with Beyond Meat. “We’re proud to expand our partnership with KFC into China, one of their largest markets worldwide, as well as introduce a new partnership with Pizza Hut in China,” a Beyond Meat spokesperson told Bloomberg. It looks like China and Hong Kong have become the new hotspot for plant-based eating!