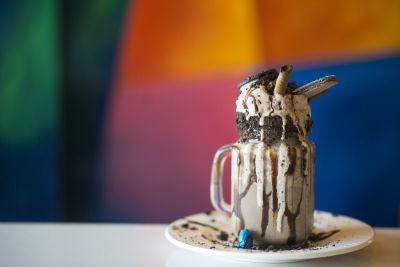 It is officially fall, and in the spirit in Halloween, Sonic Drive-In has added a new Trick-or-Treat Blast to the menu. The frozen dessert is made with M&M’s, Oreo cookie crumbles, Snickers chunks, and vanilla ice cream. It’s packed with cookies and candy, but you can make the Blast even sweeter by adding in a swirl of chocolate syrup! The Trick-or-Treat Blast is only available through November 1, so put on your Halloween costume and head to the drive-in to celebrate Halloween! In the spirit of the season, check out the chocolate pumpkin spice creme Frappuccino from Starbucks’ unofficial secret menu. You can order the drink by asking your barista for a Pumpkin Spice Creme Frappuccino with mocha drizzle around the cup, plus some pumpkin sauce on top of the whipped cream. Now that is a combination we don’t want to miss out on!

For many people, fall means one thing: PSL season! People go pumpkin spice everything crazy. And Kraft recently announced a new Pumpkin Spice Macaroni & Cheese, which might be taking the pumpkin spice crazy a little too far. A lot of other products have gotten the season twist over the years, but why mess with macaroni and cheese? It’s already perfect! Kraft describes the latest flavor as “the same cheesy Mac & Cheese Americans know and love” but with added fall flavors like “hints of cinnamon, nutmeg, allspice, and ginger.” According to Popsugar, over 50 percent of voters said they’d give a shot. Pumpkin spice connoisseurs might love the savory-sweet combo after all.

While the limited-edition mac and cheese already launched in Canada earlier this week and has a waitlist of more than 30,000 people, it’s coming to the US very soon — but only for a handful of lucky people for now. Starting September 25th (tomorrow) and through September 29, you can enter for a chance to win a box of Kraft Pumpkin Spice Macaroni & Cheese by tweeting with the hashtags #PumpkinSpiceKMC #Sweepstakes and tagging @KraftMacNCheese on Twitter.