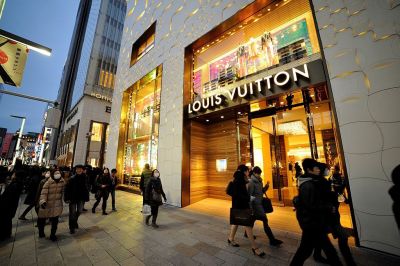 Louis Vuitton is setting up shop in Japan. In March, the luxury brand announced the arrival of the flagship Louis Vuitton Ginza Namiki store in Tokyo’s Ginza district, featuring interior design by Peter Marino and a facade by Jun Aoki. The newly revamped building, which Louis Vuitton has occupied since 1981, is meant to represent “a pillar of water” and “the shimmering fluidity of water ripples.”

“Comprised of two layers of glass, Jun Aoki’s facade is at once monolithic and imbued with fluidity – his representation of a ‘pillar of water,'” the brand shared in a statement. “Practically seamless, the outer panes curve and ripple; their three-dimensional surface enhanced by a dichroic film that produces endless color variations. At street level, the building reflects the dynamism of Ginza; higher up, neighboring towers become wavy apparitions, while a skyscape sweeps across the glass, marking the passage of each day.”
The building, which reopened to the public on March 20, is a seven-story shopping mecca that includes the brand’s watches, jewelry, leather goods, and ready-to-wear. But, that’s not all. The top floor, set to open in April, will feature Le Café V & Le Chocolat V in collaboration with renowned Chef Yosuke Suga. 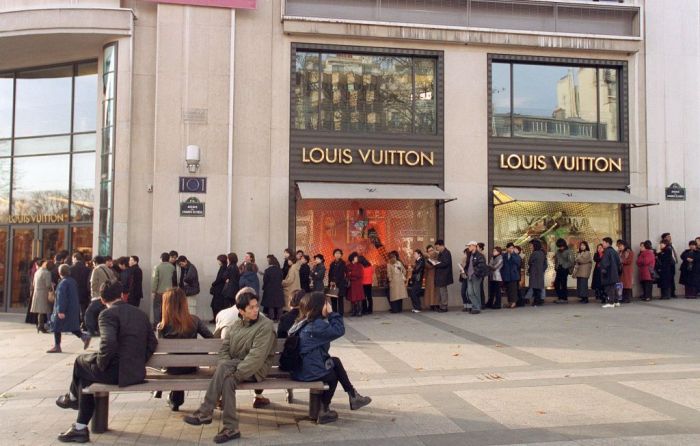 The chocolate shop and cafe will be only the second Louis Vuitton café and chocolatier in the world, following the 2020 collaboration debut in Osaka. In a statement, the brand added, “The new Ginza Namiki is an ambitious transformation of an existing location that Louis Vuitton has occupied since 1981 and coincides with the 40th anniversary of the House’s first-ever freestanding store in Japan.””Marino’s design emphasizes the building’s organic aesthetic with a central staircase that unfurls like a ribbon of sculpted oak bordered by glass,” Louis Vuitton shared. “A second staircase, located towards the rear of the store, is framed by a four-story feature wall that reinterprets Kimiko Fujimura’s painting ‘Wave Blue Line’ (1977) in artistic applications of plaster.”

Continuing the water metaphor of the facade, the interior mirrors the effect with curving counters and ceiling panels that give a sense of flow. “Even the elevator conjures the sensation of water and sky, with the rippled metal surface multiplied by mirrors playing out as though an endless horizon,” the brand added.