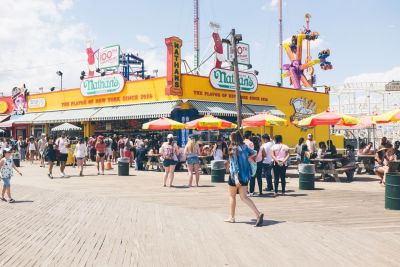 You heard that right, folks! Nathan’s Famous has decided to throw back to a slightly earlier time. In fact, it’s the same price they were when the Coney Island concession stand opened in 1916. According to Eater, the hot dog chain has launched a serious Throwback Thursday, and is now selling its namesake weiners for five cents—the menu item’s original 1916 price—if you buy any other regularly priced food from 5 p.m. until closing time. The offer is valid at Nathan’s flagship location on Coney Island on every Thursday from now until… whenever Nathan’s decides that it’s not.

Phil McCann, Nathan’s senior director of marketing told Eater that this offer has been tested at a few locations for the past five years, and it has had a couple of one-day-only runs at Coney Island. This is the first time that Nathan’s has regularly offered five-cent hot dogs since, uh, probably some time during the Woodrow Wilson administration. (This is a serious discount too: one hot dog costs $4.75 at the Coney Island location on non-throwback days.) According to one Nathan’s Famous staffer, pretty much anything from a burger to another hot dog to two orders of crinkle-cut fries counts as a regularly priced food item—one exception seems to be the apple pies—and there are no limits to how many regular item-and-five-cent-dog combos you can order during a single visit.

If you can’t get to Coney Island, you could still be in luck when it comes to getting a Nathan’s Famous dog. On Monday, the company announced a partnership with Ghost Kitchen Brands, which will bring 60 new “non-traditional locations” to the United States, and add 40 more in Canada by the end of the year. Some of the new kitchens will open inside Walmart stores, and all of the U.S. locations will feature some of Nathan’s most famous menu items, including hot dogs and fries, burgers, cheesesteaks, and fried chicken sandwiches. Ghost Kitchen brands also plans to operate its newly launched Wings of New York kitchen concept from these new spots, too. (These companies have great timing on the Walmart thing, since McDonald’s recently announced that it would be closing all but 150 of its locations inside Walmart stores.)

“We are thrilled to partner with Nathan’s Famous, an iconic brand synonymous with American tradition and the flavor of New York,” George Kottas, the founder and CEO of Ghost Kitchen Brands, said in a statement. “As we continue to grow and reinvent the restaurant industry with our unique restaurant concept, we take pride in helping iconic brands scale to reach and serve more customers, allowing customizations and combinations with other brands, all in the convenience of one order.”