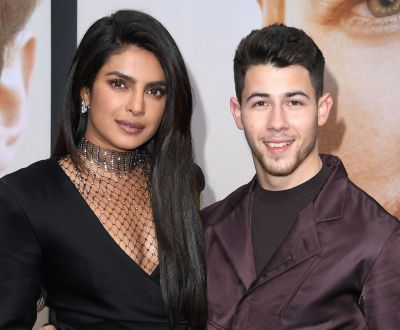 Nick Jonas and Priyanka Chopra Jonas have been- like the rest of us- adjusting to the new normal during the coronavirus pandemic by focusing on her work and her family. Now the couple are proud parents of a new puppy! They announced that they adopted a dog named Panda. “Our new family portrait! Welcome to the family, Panda,” Chopra Jonas captioned her post on Instagram. “We adopted this little rescue (soon he won’t be so little) just a few weeks ago. We can’t be sure but he seems to be a Husky Australian Shepard mix….and those eyes….and the ears!!!” Jonas also shared the same set of photos and captioned his post, “Welcome to the family Panda! Panda is a Husky Australian Shepard mix rescue and we’re already in love.” The couple are already parents to two other dogs: Jonas’s German Shepard Gino and Chopra’s dog Diana. Panda was rescued from Hollywood Huskies, a nonprofit dog rescue for huskies and husky mixes saved from neglect, abuse and high-kill shelters in California. Like his siblings, Panda now has his own official Instagram account.

In other news, Priyanka and husband Nick Jonas have been keeping busy during these trying times. “As a creative person, for me, a lot of projects ended up happening during this quarantine,” she told People. “I’ve been developing shows and movies, writing, and I finished my memoir. It’s been a creatively sound time, besides being absolutely strange.” The 38-year-old actress has taken on the role of creative advisor for the hard seltzer brand BON VIV, curating a “brunch box” that basically is a chic cocktail party. Each box gives back 20% of the proceeds to CARE, an organization devotes to fighting poverty at home and thinking about what they can do, finding ways of giving back is really awesome.”