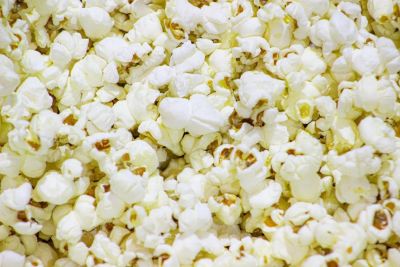 Krispy Kreme has teamed up with Smartfood to combine doughnuts and popcorn, according to a report by Best Products. I know exactly what you’re thinking: it’s a weird pairing. But, according to Smartfood’s website, the brand hit grocery shelves in 1985 “with a very smart idea: to create great tasting, ready-to-eat popcorn with quality ingredients.” So I trust the popcorn experts on this matter. And hey, I’ve never been one to turn a snack down. While it’s not yet known what exactly this snack tastes like, I guess salty popcorn is covered in a glaze just like the classic donuts.

Neither Smartfood nor Krispy Kreme has addressed this new popcorn yet, so it’s unclear which stores it’ll be available in and when. However, as noted on the bag, it is a “Limited Time Flavor,” so you’ll know what to do once it does roll onto shelves. “O.M.G. If I don’t find these I’ll seriously be so sad. This sounds amazingggggg,” one commented wrote. “The snickerdoodle is my favorite so far, but I’m really looking forward to this flavor,” wrote another. Let’s keep our fingers crossed that this glazed donut popcorn will be out soon! This is just too tempting to not try.

In other fun snack news, Act II’s Llama Party Cotton Candy Popcorn will give you all the carnival vibes. Guys, it turns blue as it pops in the microwave! How cool is that? Given the fact that it’s blue and tastes like popcorn- well, be prepared for a snack like no other. There are even “llamacorn” tattoos inside the box. So far, the Act II Llama Party Cotton Candy has been spotted at Walmart, so excuse me while I run (not walk) to the snack aisle.