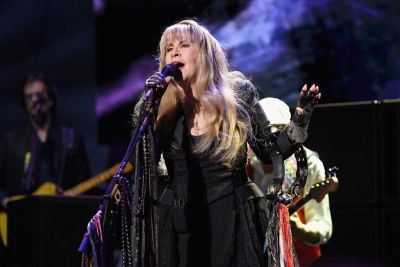 And just like that, all of our TikTok dreams came true! The legendary singer-songwriter Stevie Nicks made her debut on TikTok. In her first video on the social media platform, Nicks sings the iconic 1977 Fleetwood Mac song in her first-ever TikTok video. The 72 year old legend is seen wearing roller skates as she sits on a piano bench and sings the iconic Fleetwood Max song “Dreams.” Next to Nicks sits a record player and a bottle of Ocean Spray cranberry juice. On Twitter, Nicks shared the video and wrote, “Afternoon vibe. Lace ’em up!” The song and the Ocean Spray cranberry juice are a nod to Nathan Apodaca, who goes by @420doggface208 on TikTok and went viral for skateboarding to the 1977 track while drinking cran-raspberry juice.

Last month, Apodaca was given a brand new truck with a trunk full of Ocean Spray goods after the skater told TMZ that the idea for his viral video came about when his car broke down on the way to work one morning. “My car, it just shuts off sometimes,” he told the outlet last month. “The battery, I don’t know what it is, just shuts off. I always have my longboard in there, in case I run out of gas or something.” Apodaca’s video inspired dozens of skateboarders to mimic his video, using “Dreams” as the soundtrack. Mick Fleetwood himself took inspiration from Apodaca and shared his own skating video complete with Ocean Spray.

Fleetwood Mac’s official Twitter account reacted to Apodaca’s video shortly after it was posted. “Dreams and Cranberry just hits different,” Fleetwood wrote. “We love this!” the band wrote alongside a clip of the TIkTok video.