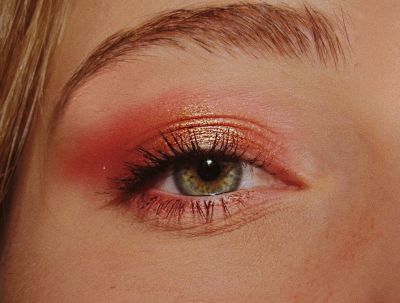 So you need to be introduced to someone who is making some pretty big waves in the Hollywood scene. Sam Visser is a 19-year-old like no other. He has done so much in his young life (and we mean a lot. He has been painting famous faces such as Lily-Rose Depp, Ariana Grande, and Kim Kardashian West since before he was old enough to get a tattoo with parental consent. So, yeah, Sam Visser is a name to know.

Visser was raised in Ventura, a surf town in California. He spent most of his childhood creating art of all kinds, though he tended to feel a pull towards makeup. “Every Saturday I’d go to the MAC counter by my house and just watch,” he explains. “I was an only child, and instead of playing with siblings or friends, I’d lock myself in my bedroom and just play with makeup.” Visser, like most kids of his generation, learned a lot about his skill via YouTube and Instagram. He learned and studied and practiced. And it all paid off. He was inside a Make up For Ever boutique on Robertson Boulevard in Los Angeles back in 2012 when he was recognized by another makeup artist, David Hernandez. They were introduced and Visser was invited to sit on the set of a David LaChapelle shoot a few days later. He was just 13 years old at the time.

Visser’s big break in the industry came in 2016 when he received an email from Kardashian Jenner Communications. They asked if he would be available for a makeup trial with Kris Jenner. “I was just this regular high school kid figuring out how to make my dream happen. Then the next thing I know, I’m standing in Kris Jenner’s bedroom thinking, My life is about to change dramatically.” Visser did Jenner’s makeup five days a week while still a sophomore in high school. “Kris put me on a new life course. Eventually, I asked her to call my mom and tell her I need to leave high school.” And that’s exactly what ended up happening. In 2016, he transitioned to an independent study program and moved to Los Angeles the following year. Ever since he has never looked back.

Sam Visser now lives in New York. “I love L.A. so much, and there’s so many amazing people there, but there are so many creative young artists in New York City, and so much has happened historically in fashion. People always say, ‘New York will show you who you truly are,’ and it’s been so true for me as an artist, as a person.” Visser describes his aesthetic as “glamorous, but always with a touch of rawness.” He wants to keep pushing himself as a makeup artist while exploring new mediums. He began dabbling in photography and creative direction. “All I want to do is create.”