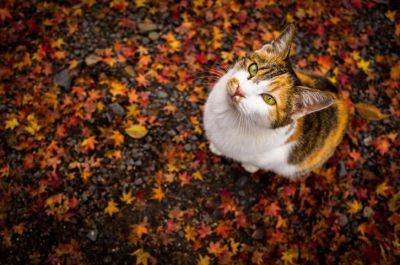 Commonly misunderstood to be aloof and distant pets, cats are actually quite sociable animals in spite of their independence. Our adorable furry friends provide great company, and as any cat parent will tell you, each cat truly does have their own personality. While some types of cats may be associated with certain character traits, in general, we tend to characterize them by the color and pattern of their fur.

Cats can generally be categorized as short-haired, long-haired, curly-haired, and hairless. When it comes to naming the patterns, things get a bit more complicated. In general, they can be divided into six types of patterns; tabby, solid, bicolor, tricolor, tortoiseshell, and colorpoint. While some of these can then be further subcategorized, what fascinated us most, is that one of these has some interesting genetics.

Unlike bicolor, which is usually one color mixed with white, tortoiseshell cats have a mixture of black and orange or red fur, which may sometimes be seen in diluted forms. Tricolor cats, often referred to as calico cats, have the addition of white in their fur coats. As with tortoiseshell cats, the colors of calico cats may also present themselves in a slightly diluted form, giving an incredibly unique appearance.

Statistically speaking, more than 99% of calico cats are female. This is because the gene for the tricolor distribution is carried on the X chromosome. Since males only have one X chromosome, they’ll only present with one color. In the rare instance that a cat is born with XXY chromosomes, it will present as a male calico cat and are usually sterile.

Since the coloring of a cat doesn’t necessarily reflect its breed, calico cats don’t necessarily share common personality traits. While there are many anecdotal stories that calico cats are loyal and warm-hearted, and some are said to be smart and independent, this is usually down to their experiences and environment. So you might not be able to tell how a calico will behave, but you’ll almost certainly be able to tell people it’s a female.