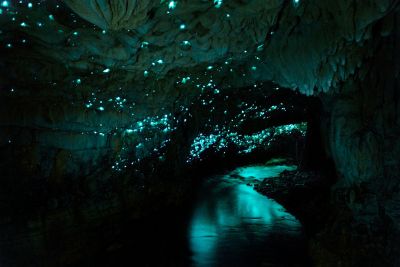 The Caves That Glow In The Dark

On the North Island of New Zealand is the rural community of Waitomo. The community is named from the Maori language ‘wai’ meaning water and ‘tomo’ meaning sinkhole. Loosely translated, Waitomo means water passing through a hole. The area around the village is littered with a variety of cave systems. These wonderful caves make for popular tourist destinations, coming high up on the list of 101 ‘Kiwi must-dos, it’s a sure magnet for local and international visitors alike.

The Waitomo caves are particularly noted for the stalagmite and stalactite formations, but, more famously, for the presence of glowworms. The presence of this species, Arachnocampa Luminosa, which is exclusive to New Zealand, is what makes visiting these caves so popular. This species of fungus produces blue-green bioluminescence during the larval and imago stages of growth; they glow to attract prey to their threads, in a similar way to spiders and their webs. The lack of wind in the caves gives for the perfect environment so their nets don’t tangle. 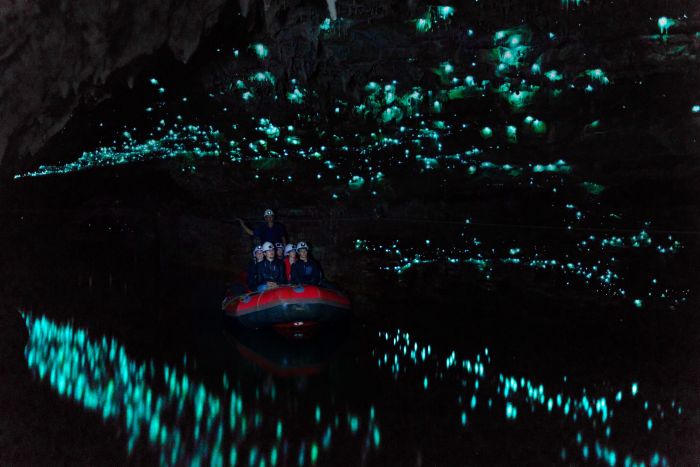 If you want to experience this beauty for yourself, you can book an organized tour through the caves that include a boat ride through the underground complex. You can enjoy observing the millions of bioluminescent insect ‘bulbs’ scattered across the ceiling of the cave. For the brave ones among you, some tours include abseiling down into the caves and black water rafting through the exciting labyrinth system.

Some of the guides that will take you through the glowworm grotto are descendants of the Maori chief who originally explored the cave, and they’ll share some of their incredible histories with you. During their tales, you can take in the glowing blue constellations above and all around you. Their beauty floods the dark, and even in the light, their dangling ‘snares’ are also a sight to see. This is definitely one of those experiences that have to be seen to be believed.