The Concert to Reunite the World

The star-studded Global Citizen show taped early May in L.A. with the goal to increase donations and sharing of vaccine doses to priority populations around the world. Global Citizen announced Vax Live: The Concert to Reunite the World, a virtual concert and broadcast to encourage Covid-19 vaccinations around the world. During the special, Global Citizen will call on philanthropists and corporations to donate enough “dollars-for-doses” to vaccinate more than 27 million international healthcare workers.

Selena Gomez hosted the event, which was pre-taped this past Sunday, May 2nd at SoFi Stadium in Los Angeles. The special will air on Saturday, May 8th at 11 p.m. ET/PT on ABC, ABC News Live, CBS, YouTube, iHeartMedia broadcast radio stations, and the iHeartRadio App. Billed as the first large-scale music event for a Covid-compliant audience, Vax Live will include musical performances by Jennifer Lopez, Eddie Vedder, Foo Fighters, J Balvin, and H.E.R., plus the lineup also includes David Letterman, Chrissy Teigen, with appearances from Ben Affleck, Gayle King, Jimmy Kimmel, Nomzamo Mbatha, Olivia Munn and Sean Penn. Also set to join the show are Prince Harry and Meghan Markle, the Duchess of Sussex, along with many other high-profile names. 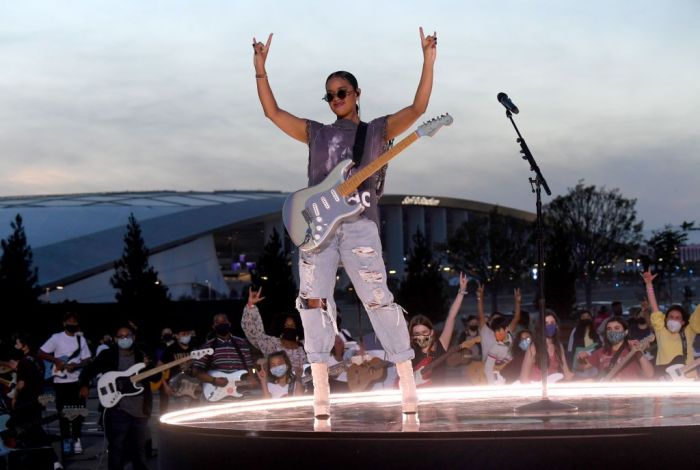 Jennifer Lopez brought down the house at Global Citizen’s VAX Live: The Concert to Reunite the World. For the big show, the 51-year-old singer took the stage twice at the philanthropic concert event, opening the concert with a special rendition of Neil Diamond’s iconic song, “Sweet Caroline.” The concert special was taped last week at SoFi Stadium in Inglewood, California, last weekend. Dressed in a glistening silver ensemble, Lopez began her performance by noting the emotions she felt of not getting to spend time with her mother amid the COVID-19 pandemic, which is what prompted her to choose to sing the ’70s classic.