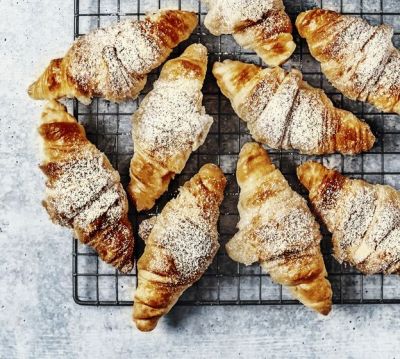 The Origin of Croissants

You probably picture Paris when you think about a warm, flaky croissant. A leisurely day on the Left Bank, a compact circular table, a steaming cup of coffee, and, of course, that croissant, delicious toasty croissant with butter. Light and fluffy on the inside but crisp on the outside. Enjoyable from every angle and in every conceivable way. Now consider where it originated. Let’s dive in and find the true genesis of that oh-so-famous French treat by looking beyond the obvious solution of “the little bakery around the block.”

As a type of viennoiserie pastry, croissants have origins in Vienna, Austria, often known as the city where croissants were first made. They have origins in Egypt and are considered a type of rugelach, a Jewish pastry of Ashkenazi descent. The Kipferl, which has a history dating back to the 13th century and comes in a variety of sizes, is the forerunner to the current croissant. They are frequently filled with almonds or other fillings.

According to legend, during the Turkish invasion in 1683, bakers in Vienna who worked through the night heard the Turks trying to tunnel under the city. Essentially, they warned the city’s defenses and prevented an Ottoman siege. In honor of the occasion, bakers produced a pastry representing the crescent moon, also a key element of the Turkish flag. When Vienna defeated the Turks, the German word Kipferl, meaning crescent, became a symbol of the victory in food.

August Zang, a baker, is credited with providing the first conclusive evidence of the croissant in France. In the early 1800s, Zang operated a premium patisserie in Paris called the Boulangerie Viennoise in honor of his native Vienna. It offered many of Vienna’s well-known confections, like Kipferl. However, his Parisian version was made flakier than the conventional desserts. As a result of their crescent shapes, Parisians started calling them croissants. The pastry recipe we all know and enjoy today was finally written in 1915 by a French baker named Sylvain Claudius Goy – particularly as we relax with a warm cup of coffee in the morning.