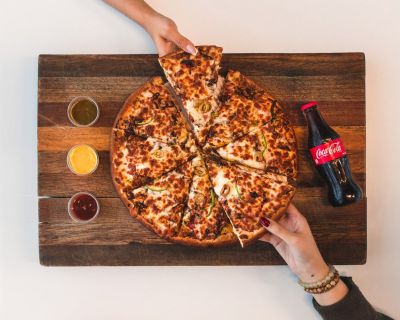 Plant-based foodies rejoice! One Planet Pizza has launched its first ever limited-edition frozen tempeh pizza. Oh, yeah!  The UK’s first vegan frozen pizza company has partnered with UK tempeh brand Better Nature to create 500 limited-edition pizzas, named Masala Tempehtation, topped with plant-based cheese for popular brand Applewood vegan ‘that melts, tastes and pulls like the real deal.’ The new pizza features a masala-spiced tomato sauce, green peppers, red onions, and chickpeas, topped with plant-based cheese and finished with Moreish Masala Tempeh Bites plus fresh coriander. The limited number of Masala Tempehtation pizzas are available to order on One Planet Pizza’s website. And the name for the pizza was chosen through an Instagram competition.

Commenting on the unique combination of tempeh and pizza, Elin Roberts, co-founder and Head of Marketing at Better Nature said: “We’re so excited to be collaborating with One Planet Pizza. “Their products really help people re-imagine the food they can enjoy on a vegan diet, making ethical eating more accessible to the masses.” Joe Hill, co-founder and Director of One Planet Pizza added: “A collaboration between us and Better Nature was only natural – two purpose-driven plant-based brands coming together to create something unique, doughy and tempeh-ting. “This limited-edition flavour is the first of its kind and we’re looking forward to hearing people’s reviews!”

A study has shown that 16% of supermarket ready meals in the UK are now plant-based. The Eating Better report following a survey of 2,404 ready meals has found that the number of plant-based ready meals on the market has risen to 16 percent from a mere 3 percent two years ago. In addition, almost 25 percent of ready meals are now suitable for vegetarians. According to the group, the survey shows ‘how well supermarkets are supporting healthier and more sustainable eating patterns by offering more vegetarian and plant-based options’ since in the UK 88% of adults eat ready meals or ready-to-cook foods.