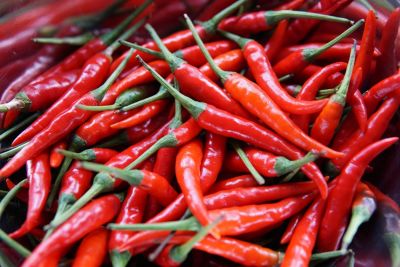 The 'World's Hottest Chili' on Earth Is Coming to Target

People are really bringing a ton of spice this year and we’re loving it! Ghost peppers are making a huge wave in the food world. It started with the recent announcement of Dunkin’ Donuts new ghost pepper doughnut. And now the ultra- spicy ingredient is stealing the sow in Hormel’s new Ghost Reaper chili, which they are boldly declaring as the “world’s hottest chili.” The limited-edition product will be available exclusively on Target’s website, and it consists of a beef and bean chili made with a blend of ghost peppers and Carolina Reapers, which are currently considered to be the spiciest chiles in the world.

Hormel chili is America’s iconic number one selling chili brand. Hormel chili took its signature chili with beans and added two of the world’s hottest peppers- ghost and Carolina reaper- to bring the heat like no other. “Chili is a dish that can be enjoyed so many different ways, whether it’s straight out of the bowl, on a hot dog, incorporated into dips and other recipes, or as a pour on for a quick and delicious dinner upgrade,” said Sarah Johnson, Hormel chili brand manager. “However fans want to enjoy their chili, for a short time they can lay stake to a pretty bold claim: that they’ve tasted the hottest canned chili in the world.”

The Scoville scale is a measurement of the pungency of chili peppers, as recorded in Scoville Heat Units. The Carolina Reapers clock in around 1.6 million units on the Scoville scale, and together with the ghost peppers exceed 3 million units, according to Hormel’s press release. (For context, jalapeño peppers typically register at 2,500–8,000 units on this scale.) Apparently, People magazine reported, “the chili elicited a strong, teary-eyed reaction. Is it really the hottest chili in the world? I cannot independently confirm that, but it definitely brings the spice and is not for those with heat-sensitive palates. To get the full effect, I ate the chili straight up on its own—no toppings or extras—but I’d definitely recommend some dairy products like cheese and/or sour cream to tame the spice. It would also be great as a spice lover’s chili dog topping, with the carbs from the bun protecting your taste buds from the full-on burn.”

The Ghost Reaper chili is on Target.com from October 25th and available for a limited time only. Are you ready to take on the heat?