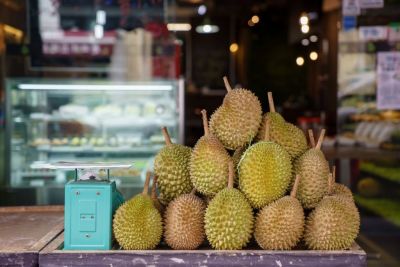 The Durian fruit has a rather unique appearance. It is about a foot long, oval-shaped, covered with spikes, and usually weighs between 2-7 pounds. Due to its distinctive size, it is named the ‘King of Fruits’ in some regions. Harvested in Thailand, Malaysia, Indonesia, and the Philippines, it is a popular fruit in Southeast Asia, but also exported to the US and globally.

Durian is one of the most polarizing foods in the world. The hatred for this fruit lies so strong, that it is even banned in some public places and mass transit.

When the fruit is ripe it begins to crack, making it easy to extract the fleshy fruit inside. In addition to its striking appearance, the uniqueness of the fruit lies with what’s inside. Both the smell and flavor seem to be impossible to describe to anyone who hasn’t experienced it. But it is this strong odor that the Durian is known for. It is said to be a pungent smell that’s been likened to dirty gym socks, rotten eggs, vomit, onions, and manure.

For those travelers and writers who have overcome the foul odor, the flavor is said to have hints of almond and a custard-like texture. Durian can be eaten raw or cooked and is used to make soups and other savory foods. The juice is also drunk, and the fruit can be used to make candies, desserts, and other sweet treats.

Despite being such a controversial food, the Durian fruit has proven to be one of the most nutritious fruits out there. It contains a decent amount of iron, multiple B vitamins, vitamin C, and potassium, and it also has a great amount of fiber. Research has also shown that it helps lower blood pressure, improve muscle strength and skin health. So if you’re brave enough to try it, at least it’s healthy.