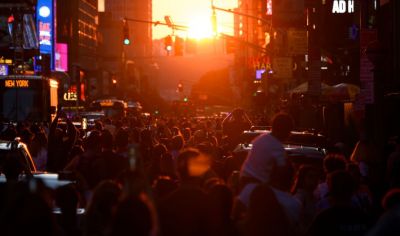 When and Where You Can See NYC's Manhattanhenge

Those who live in New York City often say they love their city for a handful of reasons. From the always-bustling streets to the plethora of food to meeting people from all walks of life, New York City is truly one of a kind. It is so special, in fact, that it is home to one of the most spectacular urban phenomenons in the world. One four days every year, before and after the summer solstice, the sun rises and sets between skyscrapers in New York City, revealing that Manhattan’s street grid is solar-aligned. New Yorkers can watch the sunset between skyscrapers this year from May 29th through July 12. Pretty cool, right? Anyone in Manhattan can stand in the middle of any east-west numbered street and watch the sun on the horizon between buildings. There are a total of four sunsets and four sunrises. Two of the events occur on successive evenings and mornings. The rectangular street grid was designed in 1811 after the city population nearly tripled in 20 years. 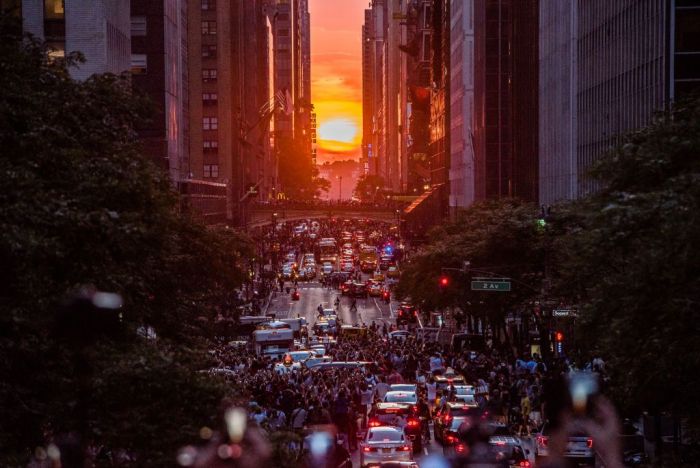 Lockdown permitting, on May 29, New Yorkers should stand on an east-west numbered street on the grid of Manhattan with a view to the Hudson River and look west to see the sunset at 8:13 p.m.  The next evening on May 30, the same thing will happen at 8:12 p.m. It will be cooler, though, because it’ll be a full sun with the star appearing to sit on the grid. According to Travel and Leisure, “After May’s Manhattanhenge, the sun’s position at sunset will appear to shift to the south. But after the summer solstice, it will once again move north. The outcome is the exact same, but in reverse; at 8:20 p.m. on Saturday, July 11, a “full sun” will be viewable between buildings, and at 8:21 p.m. on Sunday, July 12, there will be a ‘half sun.'” “It’s because of the symmetry of the way that the orbit of the Earth around the Sun works,” says Jackie Faherty, an astrophysicist at the New York City’s American Museum of Natural History. “Once you reach the summer solstice, when the sun appears to stand still, the position of the sun changes, reversing its position on the sky in reference to your horizon.” This is the Manhattanhenge effect — a chance to see and appreciate Earth’s orbit of the sun with your own eyes.

The phenomenon is called Manhattanhenge because it relates to Stonehenge, a 5,000-year-old Neolithic structure in Wiltshire, England, that was built to align with the movement of the sun. “The term was coined by our director, Neil deGrasse Tyson, who about 10 years ago, started to note the days of the year where the sun aligned perfectly with the grid of Manhattan,” says Faherty. “I took over calculating the day and time, so every year, I carefully look at the position of the sun and Earth and report dates and times on my website for when it’s best to see the sun ‘kiss the grid’ of Manhattan.”