Why Do Scorpions Glow In The Dark?

At the end of 2020, there was an emerging trend of glow-in-the-dark animals being photographed and shared online with many asking the question of why this happens to the zoological community. One of the most luminescent of these fluorescent species is the scorpion, which seems to glow a bright lime green when exposed to UV light. Now in 2021 science communicator and YouTuber Derek Muller has some theories that could explain the arachnoid phenomenon. 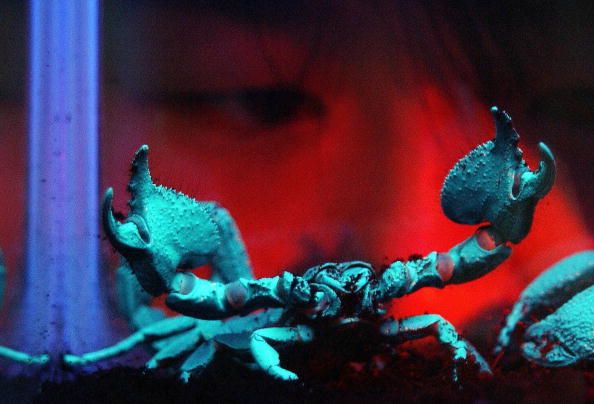 In order to attempt to solve the mystery of neon scorpions Derek Muller and Professor Carl Kloock from California State Univerisity’s biology department joined forces. In a video for Muller’s YouTube channel, the duo went through multiple evolutionary theories to explain why scorpions fluoresce. The theories range widely, from ‘relic traits’ (characteristics of an organism that was once useful and now serves no purpose) that the fluorescence was used as a sort of sunscreen to inter-scorpion communication using fluorescent signals.

However, the most likely explanation – at least according to Muller and Professor Kloock – would be that the scorpions absorb and emit the UV light so that they may better detect it. When scorpions glow what they’re doing is absorbing UV light and emitting it in the visual band of the electromagnetic wavelength that makes their glow visible to us.  Scorpions are then able to detect this light through what the Professor calls ‘photon collectors’ in their tails. This would then allow them to better sense other scorpions around them as they too would glow as well as to detect incoming predators through their UV glow. Scorpions often require cover to protect themselves from larger predators and so, therefore, depend on this detection capability to see predators even when their vision is blocked. This is just a theory put out by Muller and Kloock but is definitely a fascinating and possible hypothesis.